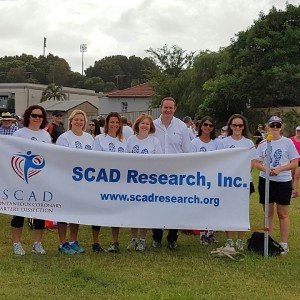 What started out as an inquiry from an Aussie survivor about organizing a 5km in Sydney to raise money for research grew into four 5km events on 3rd April.

Thank you to Sarah Ford and her team for organizing the first Aussie SCADaddles for Research:

In addition to raising funds for SCAD Research and raising awareness of SCAD in Australia, we kept up with the SCADaddle tradition of having SCAD Survivor reunions at each location. With several survivors walking in each State, it was a great opportunity to catch up via lunch, picnics & great conversations following each 5km.

Click on the pictures below to see some of the highlights of the first ever Aussie SCADaddles on 3rd April – and the start of a great new tradition!

Be a Part of the Solution

This website uses cookies to improve your experience while you navigate through the website. Out of these cookies, the cookies that are categorized as necessary are stored on your browser as they are essential for the working of basic functionalities of the website. We also use third-party cookies that help us analyze and understand how you use this website. These cookies will be stored in your browser only with your consent. You also have the option to opt-out of these cookies. But opting out of some of these cookies may have an effect on your browsing experience.
Necessary Always Enabled
Necessary cookies are absolutely essential for the website to function properly. This category only includes cookies that ensures basic functionalities and security features of the website. These cookies do not store any personal information.
Non-necessary
Any cookies that may not be particularly necessary for the website to function and is used specifically to collect user personal data via analytics, ads, other embedded contents are termed as non-necessary cookies. It is mandatory to procure user consent prior to running these cookies on your website.
SAVE & ACCEPT